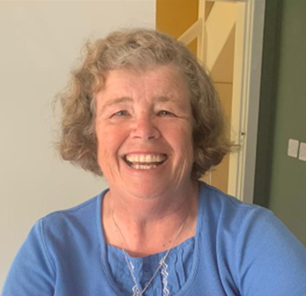 Hilarie joined the Cygnus Board of Trustees in 2014.

I spent over thirty years working in schools in Leicestershire and Newcastle upon Tyne, where I specialised in Early Years Education. During this period I worked with children speaking many languages and coming from diverse backgrounds. I have been a member of Business and Professional Women, one of the six major UK women’s organisations, for nearly thirty five years. BPW is a worldwide organisation that aims to help all women reach their full potential.

Since retiring I volunteer with ‘MIND’ Active, a local charity based in Bedlington, which works with isolated people, people having dementia and their carers.

I was asked to become a trustee of “Cygnus Support” in 2014 by a trustee of the then board. My reasons for agreeing to this was based my belief in the work that the charity was undertaking. I have a firm belief in the holistic approach that is needed to underpin health and mental wellbeing of us all.